Hello to everyone who comes here and wants to read this.
I made this thread because I came a video by ( , well not precisely this one but it's about the same topic ) and thought to myself that this is probably a very drastic and extreme 'solution' on how to lowering killing acts, drug deals and etc. ( criminal rates and acts in general)
Not only does this lowers the freedom on what people could do very much but it shows that the government wants to have absolute power over the citizens. It's not only very disturbing and frightening with what the government can do nowadays to oneself but to groups in general. With that I mean they can control and manipulate the citizens and making sure that there will always be this kind of governemnt and not one where the citizens have actual freedom.
I would ask to anyone reading this ,regardless of political orientation , if you would be fine if the government has absolute power and robs the citizens freedoms. And if you have a different solution onto how to ensure that the citizens are protected and can maintain their freedom which did not commit a crime.

Also, I would appreciate it if there are any mistakes I made in this thread so I can correct them.

With this I will enjoy anyone posting in this thread and bring forth any new solutions or thoughts you have in mind.

EmperorFawful said:
Only good gouvernment is the senate. 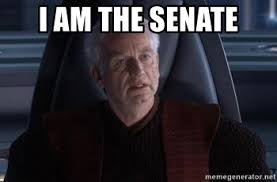 This thread was made to make atleast some relevant area for a discussion without any disturbance. I don't see your posts as bothersome posts, but rather unserious written content with an intent to display your opinion, so if you mind please write arguments or explain why/how those things could improve the current government.

Still, thank you for your opinions.

Mr.Sascha6767 said:
I would ask to anyone reading this ,regardless of political orientation , if you would be fine if the government has absolute power and robs the citizens freedoms. And if you have a different solution onto how to ensure that the citizens are protected and can maintain their freedom which did not commit a crime.
Click to expand...

You're not wrong, just incomplete.

So here's my analysis on it.

The only sensible solution for everyone to live in peace and harmony, is separation. The Uiguyrs should be given their province and they should form an independent state. As they generally wish to form under islamic law. Because they're very islamized. You would probably get something more alike Iran and Pakistan than something like, say, Turkey, even though they are a turkic people.

Separation however, is impossible. China won't allow it. One of the core policies of China is the One-China policy. To that end, it cannot let go provinces or claims on territory. It cannot let go of Xianxing, it cannot let go of Tibet (even though both provinces are nothing but shitholes), it needs to exert dominance over Hong Kong (which is definately NOT a shithole) and it needs to keep putting pressure on Taiwan and subverting it culturally while trying to undermine it economically (and it is doing that very effectively by basically creating competition for key taiwanese industries like computer parts, electronics and the like).

It is unfortunate but both people, Uiguyrs and Chinese are, due to this situation, locked in a fight. They have no choice. They cannot co-exist and therefore one needs to triumph. And by co-exist I mean they could probably live in the same country if they were segregated (as they've done for 60 years so far under commie rule), but they cannot live in the same neighborhood. And since China's other core policy is sinofication (basically chinese-ifing a region), it is moving chinese people into Xianxing. And hence, the problems. Another core policy of China is the abolition of religion, as they are god-forsaken commies, and islam therefore needs to go. Uiguyrs cannot accept chinese people in their neighborhoods and they cannot accept atheism, so they have to go.

Another reason for the influx of chinese into Uiguyrs lands is because... and this is sad to say... the Uiguyrs are not good workers. China has a lot of money to spend and it needs to spend it on infrastructure, public services and the like to employ its people. It needs to "spread the wealth" as it were because the country is too eastern-seaboard heavy. The USA for instance, is balanced with the East Coast and West Coast being sources of immense wealth but China is basically SE heavy. It needs to take its money and develop the rest of China up. It worked its way up to the NW part of the country now and it needs to start developing it. And it needs workers. Uiguyrs are not good workers. Maybe for low level work they could do the job, but they are poorly educated and can't run hospitals, schools ,administration or conduct party politics in the region. So they are getting Chinese people there to do those jobs. And what do you get when incompatible cultures are merged together in a tight spot? Chaos. And how do you deal with chaos? You clamp down on it. And the chinese only know 1 way to clamp down on stuff, and that's hard.

It is... tragic to say the least. More-so because nobody is a position to help them and nobody who would be in a position to help them will help them. Other turkic nations in central asia, the *-stan nations don't want to take them in as refugees. No great power can wage war to save them. No great power alliance will cooperate to punish the Chinese state economically for this either. The USA is not putting up tarriffs because China is being anti-humanitarian... it's doing it for state reasons and the EU doesn't want to play along with USA because orange man bad and political leaders fear that they'd lose popularity at home. (there are other reasons aside from this one, but this is certainly one of them).

So what is there to do?
Nothing. Except sympathize with the Uiguyrs. If you know any charities or organizations that are trying to basically "buy" and reallocate uiguyrs out of china, post them here. Support them if you have the money, spread the news... but the greatest lesson you can take, in my opinion, is realize that this is the future we are facing in the West if we allow our govt to basically become an political + economic oligarchy. And we are heading down that path.
Last edited: Sep 1, 2019
You must log in or register to reply here.
Share:
Facebook Twitter Reddit Pinterest Tumblr WhatsApp Email Link
Menu
Log in
Register
Top